There is Power in Prayer

Every Sunday, before Advent’s service begins, Ron Boyum makes his way to his usual spot in the sanctuary. With more enthusiasm than a high school cheerleader, Ron participates in worship. He is a man of tradition, kindness, and passion who is exceedingly loyal to his family and his church community.

Ron grew up in the Twin Cities. His father died serving in WWII soon after Ron was born. This meant that Ron lived through many changes, both great and small, in his formative years.  Having been raised Catholic, Ron attended Catholic elementary and middle schools along with the University of St. Thomas for a year. Ron worked in sales and in the food industry. During his first years of work, he met and married his beloved wife Sherry, and together they have two sons. Since Sherry was Lutheran, their family began attending a Lutheran church. “I was blown away by the music at the Lutheran church. I love singing, and now I sing very loud!”

While many things have changed during Ron’s life, one thing has remained constant: Ron is devoted and committed to attending church every Sunday. Ron remembers only a few Sundays throughout his almost 80 years where he did not attend church. “Everything in my life was thrown off that week if I didn’t attend church on Sunday.” Ron joined Advent Lutheran back in its early days, and fondly remembers the sacrifices that Pastor Jerry Anderson and other founding members made to make opening our church a reality. Ron appreciates and enjoys the traditions and community that church at Advent has brought to his life. Whether he’s singing familiar hymns, hearing sermons that challenge him, or praying for those in need, Ron always has a feeling of peace when he is at Advent. 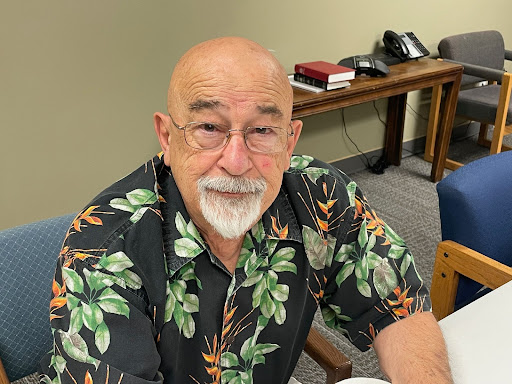 All along the way, prayer has been a part of Ron’s nightly routine, and he has discovered that there is power in prayer. Now, decades after joining Advent, Ron’s group of friends and his family are facing the challenges of aging.  His church family has been a constant support to him, especially now as his wife’s health has declined. Ron has supported loved ones through divorce, loss, sickness, and adversity. “I have a lot of people in my life that I can’t help physically or financially, but I can help them by praying for them.” And that he does - every Sunday. There is indeed power in prayer.

Advent thanks all of you for all the ways you support others in our church and the greater community through prayer and outreach. Your gifts make it possible for us to have a prayer line, for prayer shawls to be given to those in need, and for us to gather together each Sunday and Wednesday to worship and pray.

We encourage you to wear your "church appropriate" pajamas!

We're so happy to welcome you here. We hope you find in Advent a unique community, commited to growing in our faith together. Recognizing our shared humanity, we believe God calls out the best parts of each individual, and we know a strong group of God's followers will do the same for each other. We invite you to explore the special ways in which we stay connected at Advent, and we encourage you to find the best fit for wherever you are in your faith journey.

Christ is alive and active at Advent!

Our Story
Please take a moment to read Our Stories

Gift of Love
Avenues for Youth

We provide an opportunity for kids and students to meet, know and follow Jesus through engaging age-specific environments, building significant relationships with others, partnering with parents, and giving opportunities to build life-long faith of their own.

Thank you! Your submission has been received!
Oops! Something went wrong while submitting the form.